How a little bear comes together - in which I find a little soul in a tiny bit of fur. 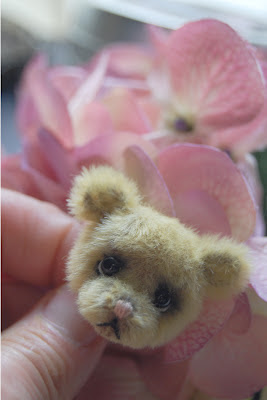 The face is the most important part of the bear to be sure! That can take quite a while - until the little one looks back at me with the love I've put into him. 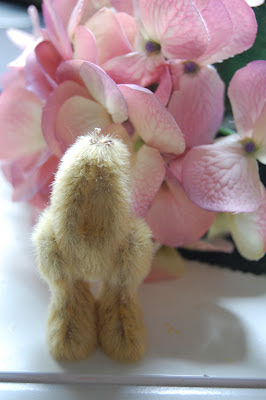 Because I started out making big bears, I never realized all little bears aren't jointed just like the big ones. I've learned that some "string joint" the bears rather than using cotter pin joints.  I just make the little ones the same way that I made the big 'uns! The smaller they are, the fiddlier they are to get all the hardware into to make their little arms and legs work properly. All of my bears with straight legs stand nicely by themselves. This is an engineering exercise using mat board in the soles and enough weight from steel pellets in the feet so that they stand easily. 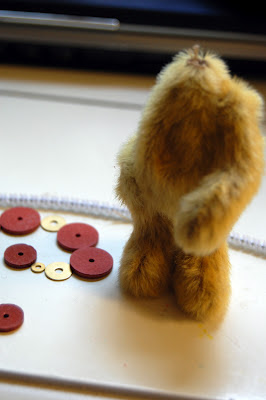 The little arms are wired before they are added on using these little discs and washers to make them move easily. After the wire is put in, polyfil surrounds the wired arm giving it a nice form. 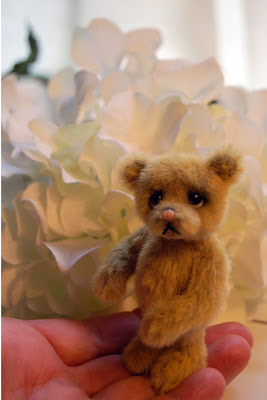 Then finally, a new little dear is born! Here he looked up at me and asked, "May I have some little wings now?"
Posted by Donna Griffin at 6:54 PM

He is an angel, he certainly want wings. Interested you are using the mat board. I just fill mine with garnet or glass sand. Must try one day.
Your work is to die for.
Hugs
Kay

You are so sweet, Kay!! I suppose I started using the mat board when I made bigger ones to give a flat bottom and more stable platform. I really haven't tried the feet without out it to see if the little bear will stand. I know that I've tried thinner cardboard and it bends too easily. I've worked as a picture framer, too, and have lots of mat board about!
Hugs, Donna