More houses for the show 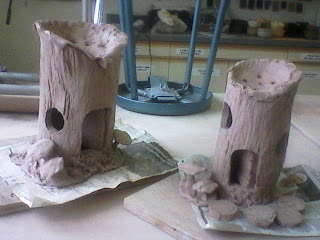 These "tree houses" are a bit smaller than the first one. I think you can see the holes in the top where I plan to put holly or evergreen branches. I kept the little round circles I cut for windows to use as stepping stones. Each house has some mushrooms around the sides as well. These two houses just went to the kiln room for the first firing. I'm going to paint them with acrylics after the second firing instead of using glazes which would appear shiny. Hope you can come and take a look at the Hunt Valley show on November 13th, but I'll have some photos of the finished houses and table posted here.
Posted by Donna Griffin at 7:30 AM