After the Hobbit House, I couldn't wait to start on the next "House" for little bears and woodland creatures. The Hunt Valley show on November l3th is always so festive as all the artists decorate their tables in a holiday theme....and some wear costumes. It is just a spectacular sight! Well. I invisioned my table as a woodland scene and decided to make some "tree" houses. I've fashioned three tree stumps, cut doors and windows, and left holes in the tops so that I can put holly and other season branches in the top. So far, the first one has finally dried enough to take it to the kiln room for the first firing. The other two should be dry enough next week. I took this photo with my phone camera yesterday. 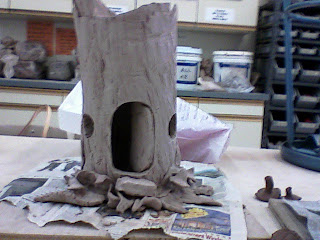 There will be tiny battery operated tea lights inside the houses. I will use red iron oxide for coloring before the final firing. Each house has some mushrooms outside which I'll paint with acrylics after the glaze firing. One has to anticipate these projects as a lot of time has to pass with the objects covered in various pieces of plastic so that they will dry out properly. I've heard that there are excited little animals waiting to move in!!!
Posted by Donna Griffin at 9:05 AM

Thanks! It's just gone in for the second firing. I've made two other smaller ones to use in my display as well. I'll be sure to photograph along the way. Thanks for writing!
Cheers!
Donna