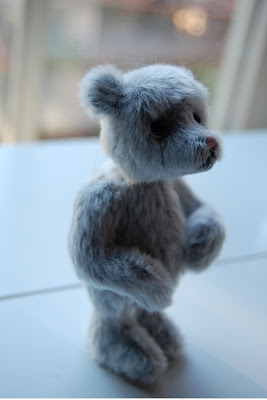 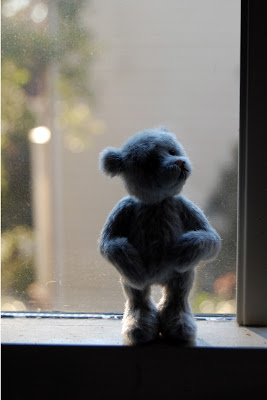 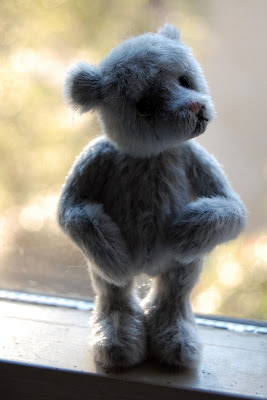 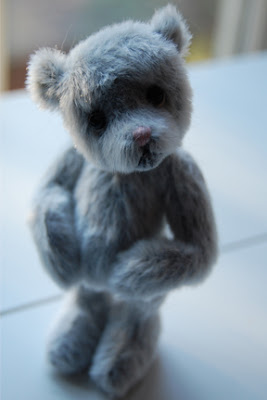 When one seeks to change something that is very small to begin with, the changes are....well, small. Toward the end of last year, I began looking at my very small bears and thinking of how I might give them a new look. I carried one little "Daniel" to the Hunt Valley show and he was adopted very quickly - without my taking anything but a snapshop of him with his new Mom. Others saw him and are awaiting more of this new little guy.
So here's what I've done. This new little man has a smaller (not shorter) snout, smaller nose, shorter legs, and ears that are sort of pointed toward the back of his head. So far, I've kept the wired arms which are so handy for carrying flowers, candy, iPhones, etc.
I haven't abandoned the little face and body which I've been making, but as in all things, change is inevitable, and change is good.
Toward the end of a workday, he and I were admiring that "golden hour" that comes in the early evening, and he agreed to pose for a few "artsy" shots.
Posted by Donna Griffin at 8:52 AM

I think he's just darling! I don't know how you make such small bears. I think I'll be making more large ones this year, LOL!

Thanks, Debora! and Happy New Year! I'll tell you how: Don't start with a very small pattern. Take one of your patterns and gradually make it smaller and smaller. That's how I did it. Now, that's all I want to make!!! Though requests for some Big (10 inch!!! HA!) come along.
Thanks for writing!
Mini hugs, Donna

This little guy is full of character - love the color! Happy bearmaking!

Thanks, MaryAnn! Lovely fabric from Berta of Threadteds in the Netherlands. Your tip of hand sewing has led me down an interesting path - I'll always be appreciative for that suggestion!

How sweet of you to say, Kim!
Love your name too - same as my wonderful daughter!
Thanks for the lovely message!

Donna all your bears are perfect, this little one is just as sweet, I cant wait to see more!

Helen! How kind of you! The feeling is mutual about your wonderful creations. Sorry it took so long to answer, I've been out of town visiting my son! Thanks so much!
Hugs,
Donna

Obrigado por seus abraços tipo mensagem para você
Dear Bella Bear:
I hope this translation is appropriate. I thank you so much for your kind words. A kiss to you from southern Virginia, USA!!
Donna